You know that God must be up to something when a person with bright-colored hair walks into your church.   Bill came to our church a few months ago, and you could see him coming a mile a way.  His hair was neon pink.  The next time I saw him, it was green. Now it is bright red. Wildness might just be his natural color.  Sitting down to talk with Bill was an experience.  Jesus saved him out of a life of numerous addictions, and now Bill has real compassion for anyone stuck in those traps. He will pick up stray folks off the street who are trying to get their lives together.  He puts them to work in his auto body repair shop and begins to invest in them.  Bill is the real deal; all you have to do is meet him once and you can tell that he loves Jesus.

I got excited about Bill coming to our church.  He and his wife asked me many questions about our missions and outreach programs.  After a few hours of Bill discovering if our church was for real, I had to ask him, “What’s up with the colored hair?”  Bill said that he colors his hair all the time.  One of the reasons that he does this is to see if people will accept him, especially in churches.  If he goes into a church and no one will talk to him, he feels that church must not be for real. (James 2:2-4)

I am happy to say that everybody at our church has been very accepting of him.  In fact, when he and his family decided to join the church, he asked if he could just sign a piece of paper.  I told him “No way.”  He would have to walk up to the front of the church to join.  We wanted the hair!  Bill and his family joined at our contemporary service where mostly younger people attend, but I did wonder if our older folks would accept him at the traditional services as well.

One day, Bill sat right in front of a couple named Dewey and Betty.  They had just celebrated their 65th wedding anniversary and they are pretty  “old school.”   Dewey reached out to Bill and said,  “Young man, what is your name?”  Betty and Dewey introduced themselves, and they found out that this guy with crazy hair really loves Jesus.  Bill went on to describe how he loves others.  He reaches out to the less fortunate, the drunk who can’t keep a job, the drug addict off the street, even those who have ended up in prison.  When Betty heard this, she got a big lump in her throat.  She grabbed Bill with her aged hands and looked right at him with eyes starting to tear up and said, “Our son, David, is in prison.  Do you think there is any way you could reach out to him?”

Bill was actually scheduled to go in two weeks to the prison where Dewey and Betty’s son was incarcerated.  Bill started to get nervous; he really wanted to see their son, but it was not under his control. You see, when Bill goes into the prisons, his group makes popcorn and funnel cakes to treat the prisoners.  Bill’s responsibility is to make the funnel cakes, while the others do most of the talking with the prisoners. Bill became really concerned that he would disappoint Betty and Dewey……what if he could not find their son? Cooking funnel cakes is intense work, and the prisoners really want those funnel cakes.  How could he get out from behind the cooker to even begin looking for David?   So Bill simply began to pray.

The day came when they were scheduled to go to David’s prison.  The sky looked like it was going to pour.  Bill’s truck and trailer had two flat tires on the way.  It seemed like nothing was going right, and yet Bill’s mind was focused on one thing: “Lord, let me meet Betty and Dewey’s son.  They are counting on me.”

They finally got there and got set up, and almost four hundred prisoners lined up for the funnel cakes.   Bill kept his head down, making one funnel cake after another.  He barely had time to breathe, much less take a break to look for one man out of four hundred.  He could not look up, but he kept praying.

After hours of cooking, Bill finally found one moment to stop.  He looked up at the prisoner who was directly in front of him.  (There was still a long line with hundreds of others.)  This was the only prisoner Bill had been able to actually talk to all day.  Then he just blurted out, “Would your name happen to be David, and are you Betty and Dewey’s son?”  The prisoner just stared at this crazy, colored-hair guy for what have must have felt like an eternity.

The prisoner finally replied, “How did you know my name and who my parents are?”  Bill gave a big sigh of relief and thanked the Lord. Then Bill’s eyes began to tear up and his heart swelled as he gave David the message that his parents love him and Jesus loves him.  After meeting David, Bill could not wait to go tell Dewey and Betty what only God could have done. That is the real deal. 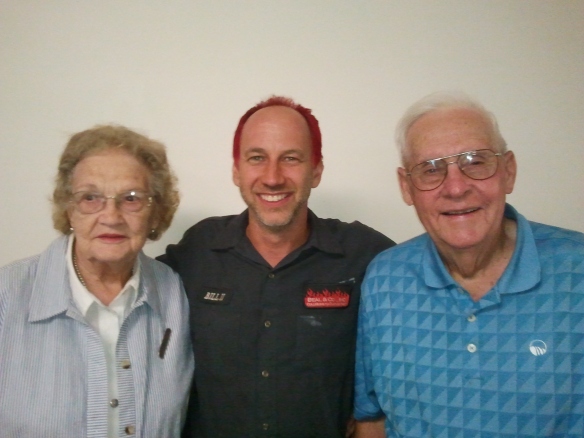 Invest in the few, change the world.